Thresher Shark Indonesia was founded in 2018. Their work aims to protect endangered pelagic thresher shark (Alopias pelagicus) in Alor Island, Indonesia through investigating the critical habitat, socio-economic importance of the species for the community and conservation outreach to local schools. They combine research and community engagement to inform policy decision for local protection of the species.

Thresher Shark Indonesia first documented thresher shark sighting around Alor diving sites, they began collecting movement information through satellite tagging studies, and also gained the perceptions about the fisheries dependency of thresher shark fishing. Thresher shark fishing in Alor was previously unknown to local government institutions. Their outreach activities have successfully been delivered to more than 500 Alor communities through radio, community events, and other engagements. This has shifted the perception of the local communities to the importance of conserving thresher sharks and valuing them as a local tourism asset in Alor.

Over the coming weeks we will look into the current projects of Thresher Shark Indonesia in more detail.

Words and Images by Marty Snyderman

While the term “muck diving” is one that would probably not pass a smell test with the marketing gurus on Madison Avenue, experienced muck divers know exploring the muck to be a featured attraction of diving in the water surrounding our resorts at both Atlantis Puerto Galera and Atlantis Dumaguete.

If you are new to diving or simply have not yet enjoyed the opportunity to muck dive, you might not be familiar with the term muck diving. Don’t let your lack of familiarity or the name turn you away. The term muck diving was first used to describe exploring areas where the bottom consists of black sand, mud and silt in sites that are often influenced by some current flow and a source of freshwater. Over the years the definition has expanded, and today the term muck diving is often used to describe dives over almost any area that has a soft bottom as well as dives around structures such as a pier or dock where the pilings along with discarded tires, bottles and other man-made objects combine to provide habitat and hiding places for all kinds of creatures. 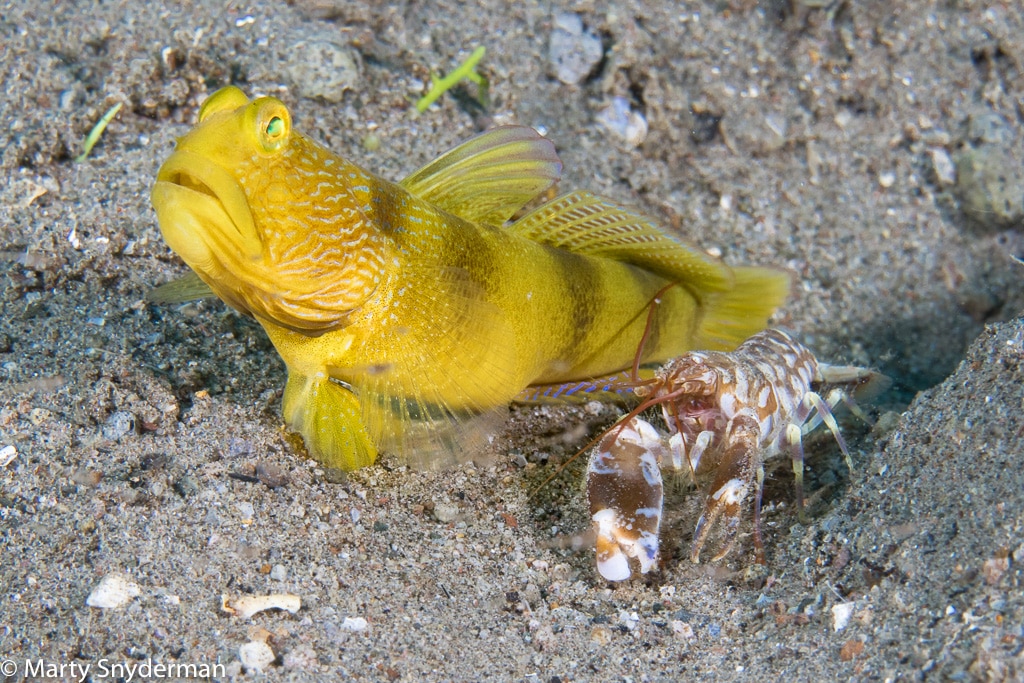 Shrimp goby and shrimp on the sand

But it is not just the nature of the sea floor or number of species that one might see that has made muck diving so popular. It is the fact that many of the encountered creatures are so bizarre, amazing, different, and well adapted for their life style and their chosen habitat that they routinely leave divers in awe of what Mother Nature has to share. Creatures such as ornate, robust, and halimeda ghostpipefishes, shrimpgobies and their partner shrimps, strange-looking scorpionfishes, sea moths, skeleton shrimp, decorator crabs, stargazers, gurnards, frogfishes, cuttlefishes, seahorses, octopuses, and snake eels are daily fare in muck sites. 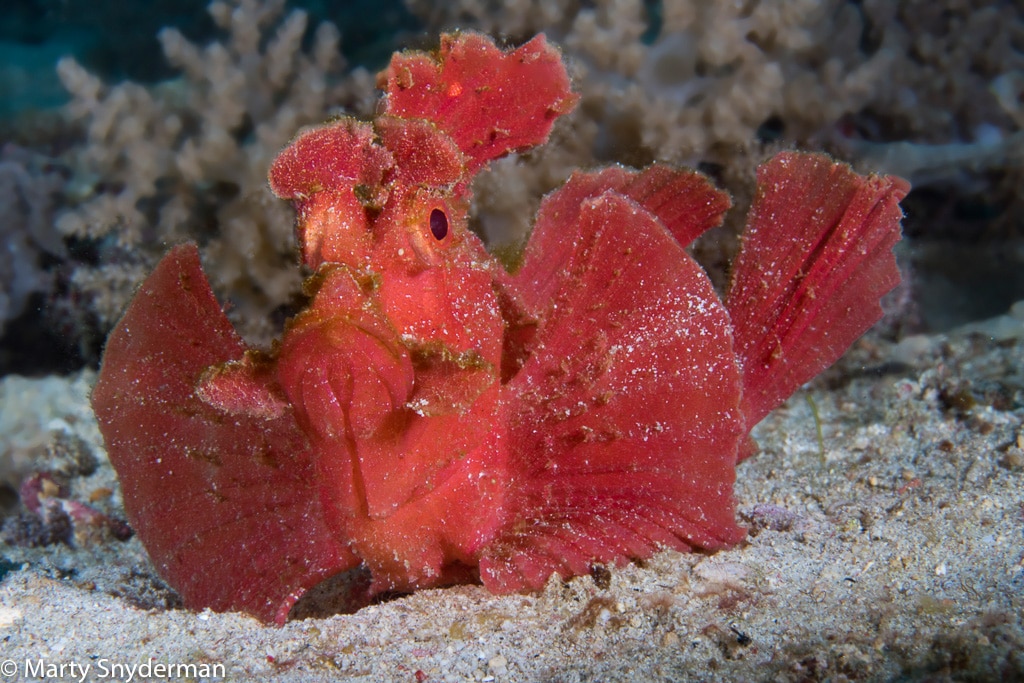 Paddleflap Rhinopias on the sand

In many muck diving areas, the bottom is not completely barren. Small patch reefs and anemones in the sand provide refuge for additional species of fishes, crabs, shrimps, lobsters, and squids etc. In short, muck diving can be crazy good! 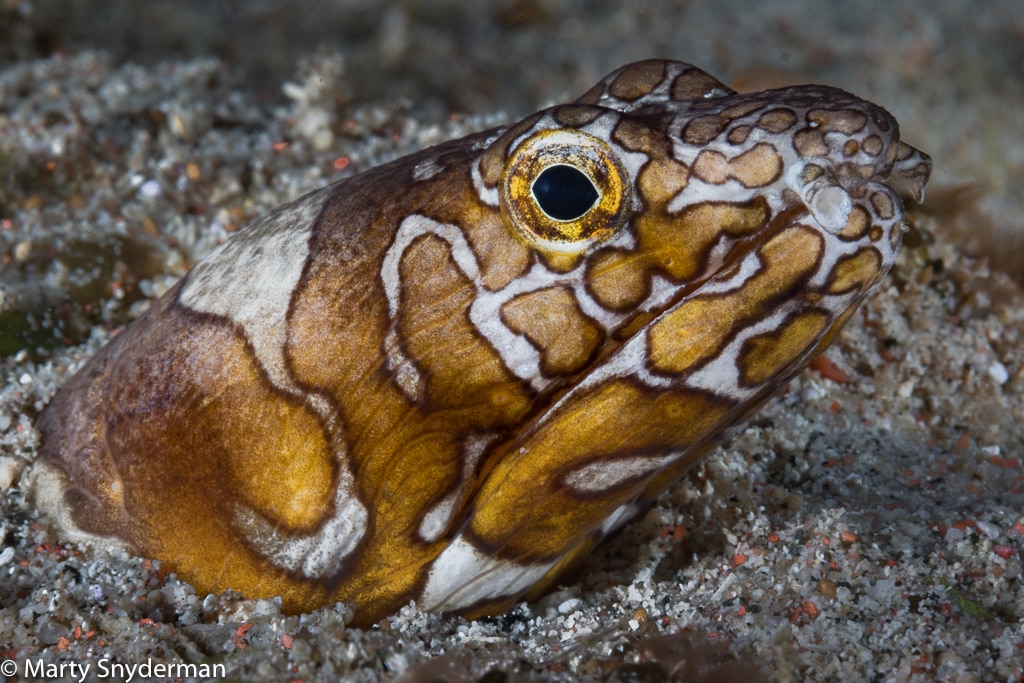 Napoleon Snake Eel in the Sand

For many divers the first time they look around after entering the water at some highly acclaimed muck diving site, their heart sinks as the surroundings do not bring the term beauty to mind. Drab is usually more like it, and upon first consideration most muck diving sites look boring. But you’ll be selling muck diving short if you judge this book by its cover. Just trust those that brought you to the site and go see what there is to see. Odds are you’ll be absolutely amazed. 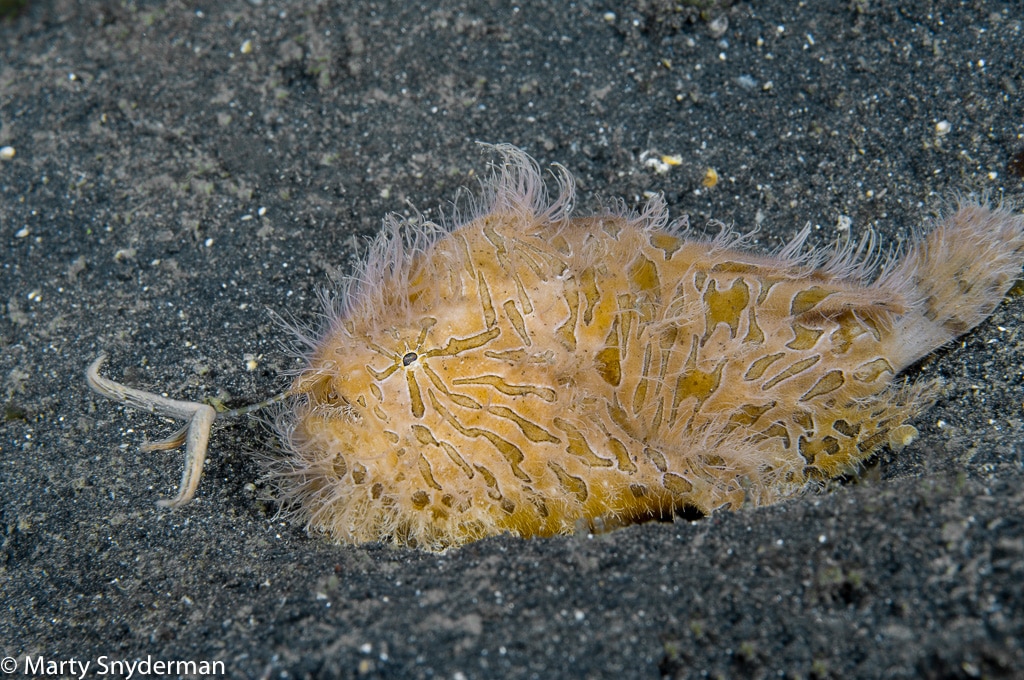 In many muck sites it is extremely easy to stir up the bottom and reduce the visibility with a single kick of a fin or the loss of buoyancy that causes a diver to crash into the sea floor. It is best to keep kicking and all other movements to an absolute minimum, and to achieve and maintain neutral buoyancy.

After that, it is “get low, go slow, be curious, and look closely” as you scour the bottom and any structure whether a soft coral, sponge, or debris such as a dead leaf or piece of driftwood on the sea floor. Take two looks at the slightest aberration. See something that looks just slightly different than its surroundings, and the odds are that you will be looking at some mind-blowing animal. 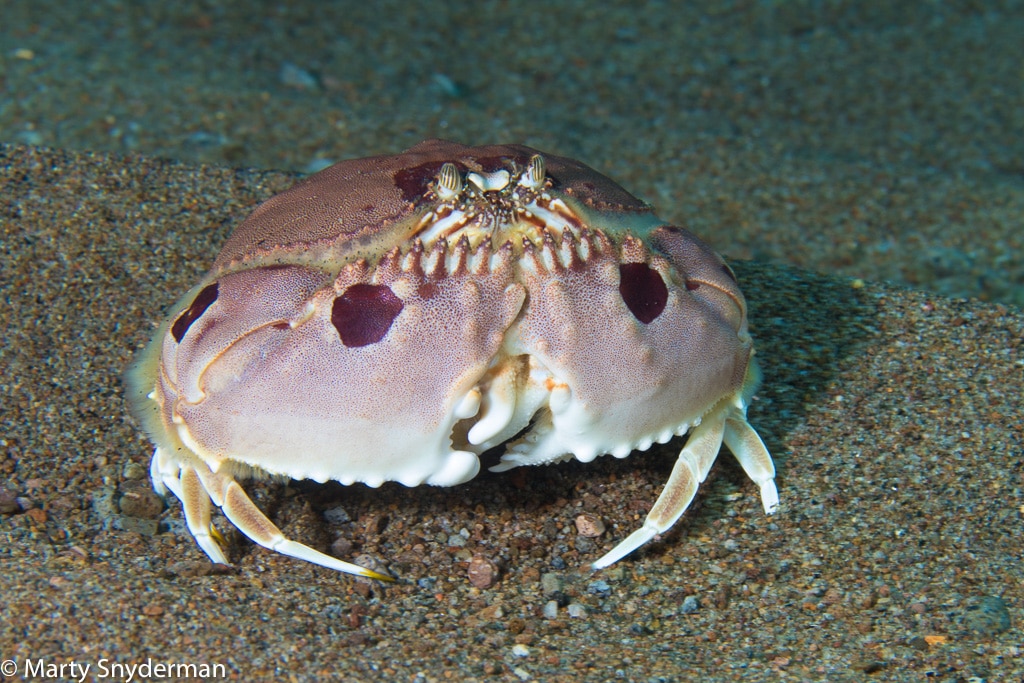 A Box Crab scurries before burying itself in the sand again

Be patient with yourself as you learn “how to look”. Divers that are new to muck diving almost always swim past subject after subject without spotting them during their first several muck dives. And they are almost universally amazed by the animals their dive guides spot. It is like the guides and new divers are diving in different oceans.

The key to the guides’ success is that they know where, how to look, and who they are looking for. Of course, gaining that expertise takes time. No doubt, their experience is a huge help. When you ask them how they do what they do, they are usually quick to tell you they “get low, go slow, remain curious, and look closely”.  And I’ll throw in a “have fun and allow yourself to be amazed by Mother Nature”.

Visit www.atlantishotel.com to find out more!

Floating, weightless surrounded by the blackness of the ocean at night time, that eery sensation of not knowing what lies beyond the glow of your flash light, that’s the first feeling I got on my very first Black Water Dive.

For many, I am sure Black Water Diving is a new term in the diving world, or maybe even something you have never heard of before, so what is it? Well, you head off into the middle of the ocean, where it’s deep. Really deep. At least 300m deep, and deeper seems to be better, of course its “Black Water” so this is at night time.

Diving out in the middle of the ocean at night has its concerns. The main one is the depth, you wouldn’t want anyone sinking down to the bottom. The second, is losing a diver. You’re out in the middle of nowhere and it’s dark. On the first attempts at Magic Island, we had the divers tethered to the boat via a 20m rope with a weight on the bottom and a carabiner clip attaching them to it. This allowed them to slide up-and-down the rope, but they couldn’t slide of the end due to the weight. The issue here is movement. The boat drifts along at a different speed and sometimes direction to the diver, depending on the current and the wind. This results in the divers been pulled along and unable to look at any creatures. In short; it doesn’t work and the freedom you get from diving is gone.

The fix to our issues was somewhat simple and a little scary, at first. After asking around to a few friends (thank you) we discovered you only need one line attached to a small buoy, not the boat, with a weight on the end. Then you need lots of lights and some strobes. The strobes are attached to the buoy, so the boat crew can easily keep watch. The flash lights are attached to the line at certain depths, we chose 7m, 14m and 21m which is the end of the line. Then you jump in and dive around the line. This helps with having a reference and more light to see stuff. And the stuff… that’s why you’re really here at this point, at this time of day.

That eery feeling, been lost at sea, sinking to the bottom of the ocean, all of these concerns soon go to the back of your mind as you become memorised by creatures you never imagined existed. Everywhere you look there’s something to see, the ocean out here is absolutely full of life. Jellyfish, siphonophores and comb jellies are a certain, and they all have their own beautiful display, from neon lights to strange flamboyant dances, or both. Cephalopods are also a common sight, especially small squid that dart around leaving jets of ink in the water as they get spooked. Less common is the paper nautilus, a pea sized animal that clings to debris drifting through the water column. I could fill the rest of the blog with all the critters you can see, but I wouldn’t want to spoil it for you.

The best way I can explain the feeling you get from black water dives, is to imagine mixing the nervous excitement you had when you took your first breaths underwater, and the sense of wonder and awe after completing your most amazing muck/critter dive. If your looking for the next adventure in the scuba world, make sure to visit Magic Island and book on a black water dive.

For more information about Magic Resorts visit their website by clicking here.

All the latest news from the world of scuba diving and marine conservation direct to your inbox. Subscribe to the free Scubaverse email newsletter for news, features, competitions, special offers and more!.

Update from Magic Resorts in the Philippines